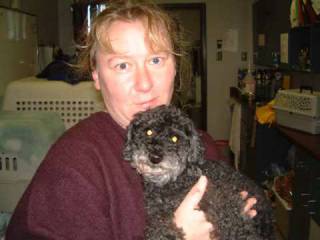 Annie was a little poodle I brought home Christmas day 2003

Annie was dumped in a parking lot the Saturday before Christmas. It turned out she had a brain tumour and there was nothing I could do to save her and she was dying. It was one of the worst experiences of my life - I couldn't help but get seriously attached to her. But before she died I gave her refuge and called her "Prajna".

I can't remember now where I adapted it from, so if you recognize it, please let me know... but I think it's from somewhere that had something about ceremonies for liberating animals.

I sat Annie in front of me on my zabuton in front of my lit shrine and chanted the whole thing aloud - I wrote it in the context that she was in the process of dying (she died the next day) but it can be changed so that it can be given at any point in a dogs life I'd imagine.

At the end is my particular sect's Homage that is said at the end of all ceremonies - I love it.

Homage to the Lord of Great Graciousness and Teaching, the Great Master Shakyamuni Buddha, Who from His great benevolence and great compassion has pity for all sentient beings.

Looking up in respect to the Lord of Great Graciousness and Teaching, Great Master Shakyamuni Buddha, I pray that his realization of the light of benevolence and compassion may guard and protect, care for and keep us. You are going to die soon, so in accordance with the Universal and Far-reaching Scriptures of Mahayana, I confer upon you the Three Refuges. It should proclaim the twelve links in the chain of dependent origination but, because as an animal you’ve been ignorant and unenlightened and, due to your creation of heavy karma, have received its retribution, your six senses are dull and deluded and have been unable to comprehend the profound Teachings of these Universal and Far-reaching Scriptures. I respectfully ask that the wondrous spiritual powers, awesome virtues, and profound unseen aid of the Three Treasures through Their compassion and pity open up the heart and liberate the mind of your wonderful sentient being so that you will be able to respond swiftly to the profoundly marvellous Dharma and thereby alter your karmic retribution and receive a rebirth that will help attain speedy liberation.

Explain the Three Refuges as follows:
O you sentient being, from beginningless time you have failed to hear of the Three Treasures and have not understood how to take refuge. For that reason you turn upon samsara's wheel of transmigration as it spins out existences in the three realms of sense desire, form, and beyond form. You have now fallen into the body of an animal which your past lives have earned you. For your sake we have now informed the Three Treasures of your piteous state and pray that you endeavour to protect Them and keep yourself ever mindful of Them. Open up the hearts of your companions and free their minds.

I will now bestow upon you the extremely profound and wondrous Dharma of the One Body which is the Three Treasures. The Three Treasures are called Buddha which signifies `realization', Dharma which signifies `the Teaching' and Sangha which signifies `the harmony of those united in their spiritual one-mindedness'. These Three are the One; this One is the Three. They do not form a hierarchy nor are They equally ranked nor are They lined up in a sequence nor are They separate and distinct from each other. We call That which goes beyond the grasp of the discriminatory mind the Treasure House of Profound Wisdom. Whatever in the world and in that which transcends the world is supreme and most valued is called a treasure. When Buddha, Dharma, and Sangha are considered to be Treasures, all things will never fail to take refuge in Them. This is why we call Them the Three Treasures. Although the underlying Principle may extend far and wide, nevertheless when It is your pure Original Nature, It returns and is never far from you. You should have the deepest faith and trust in this Principle and take refuge in It. Homage to those who take refuge in the Buddha.

Next, give the Three Refuges, repeating them three times:

Then continue as follows:
From now henceforth, call upon the Buddha and make Him your teacher; do not take refuge in the pathways of Mara. Thus we pray

Offer incense and then recite the following:

And because you are now a Buddhist dog, your new name is –

You who are a sentient being related to land, because your hindrances from beginningless karma are very grave, be mindful that you have fallen into an animal existence. Accordingly, for your own sake, turn now and be face to face with the Three Treasures, lay bare all your mistakes and, with an imploring heart, repent your mistakes. I pray that the karma from your defilements will be eradicated in an instant so that you can then be reborn in a heaven where, being close to a Buddha, you may receive your prediction of Buddhahood. As someone of land now and in the past, repent your mistakes with utmost heart and mind. Since beginningless time you have not awakened to your Original Nature and have turned upon the wheel of birth and death within various states of existence. Now, having encountered these teachings of the Mahayana Dharma, we pray that you will now repent your defilements, however boundless and heavy they are, as though you saw what the Buddha, the World-honoured One, sees and as though you knew what He knows. We pray that you bring your defilements to an end. We pray that you bring your defilements to an end.

Next, recite the following concluding prayer :
From the beginning there is neither birth nor death. Because of the accumulation of bad karma you received the body of an animal; Discard this karmic body quickly and enter the world of purity. Desire the pure crown of Enlightenment and realize the mind of a Buddha quickly. At this ceremony we have heard this Dharma once again. As your heart awakens to the Unborn, you, equally and without the slightest difference, will personally receive the Buddha's prediction of Buddhahood just as the Blazing Lord of Awesome Virtue did. I earnestly wish this as I ordain you, the disciple [name of the animal].

By this merit may all attain omniscience
May it defeat the enemy, wrongdoing
from the stormy waves of birth old age sickness and death,
From the ocean of samsara, may I free all beings.
By the confidence of the golden sun of the great east,
May the lotus garden of the Rigden’s wisdom bloom.
May the dark ignorance of sentient beings be dispelled.
May all beings enjoy profound brilliant glory.

Links to my other blogs and websites