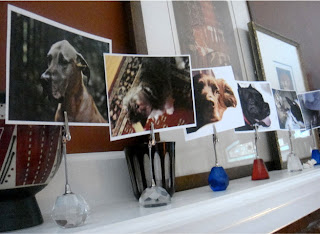 Yesterday we had a buddhist ceremony for 8 dogs that have recently died - we had a gathering of people, and lots of dogs and spent the evening remembering our lives together - after having let them go 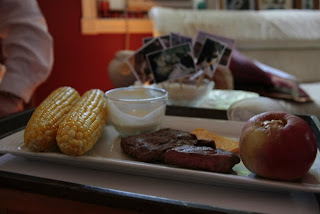 Sukavati's are rituals that include fire - and we burned up photos of the dog's to symbolize Stella's, Ursa's, Peaches', Jackie's, Ruby's, Mitzi's, Trouble's and Saige's release from clinging to this live that they've lived with us - and on to whatever great adventure they're going to go to next. 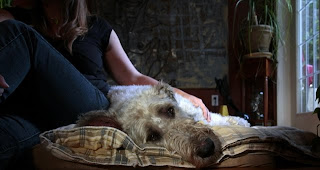 Hopefully the dogs who came to the ceremony and the evening had a good time - I brought Charlie and Buttercup - and I know Charlie wasn't all that thrilled, especially since Janet cut his nails, and he'd rather chew on rocks than have his nails cut - and as the evening progressed, he began to show how he felt - 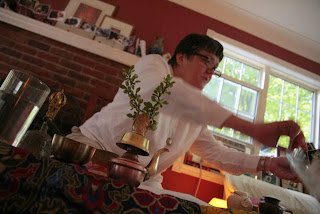 but I wanted them there so they could suck in any auspicious wafts that might be going around - with them both being so old - they need all the good vibes they can get right now, that's for sure! 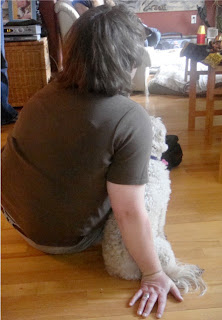 During the ceremony, Coleen recited a couple of poems - one of which she only said one line of - but I have looked up the whole poem because it's a good one, and I'll put it here, and the 2nd one is more like a little Buddhist song - I don't know if it made it to the tape - I don't think it did, unfortunately - but here they are -

"all you sentient beings i have a good or bad connection with as soon as you have left this confused dimension may you be borns in the western sukavati and once you're born there, complete the boomis and the path"

And here's the poem - by EE Cummings -

i carry your heart with me

i carry your heart with me(i carry it in
my heart)i am never without it(anywhere
i go you go,my dear; and whatever is done
by only me is your doing,my darling)
i fear
no fate(for you are my fate,my sweet)i want
no world(for beautiful you are my world,my true)
and it's you are whatever a moon has always meant
and whatever a sun will always sing is you
here is the deepest secret nobody knows
(here is the root of the root and the bud of the bud
and the sky of the sky of a tree called life;which grows
higher than the soul can hope or mind can hide)
and this is the wonder that's keeping the stars apart 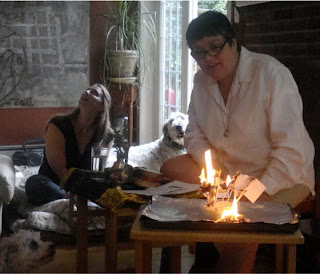 Below is a video that I made of the ceremony, which is a distillation of it - I had to cut it down to 10 minutes because You Tube only lets you make videos of 10 minutes or under, so I had to cut out the chit-chat - but you get the meaning of it. I hope you enjoy it -

My baby girl just passed away Dec. 9, 2010. I'm not sure you still log on to blog but when you do, I just wanted to thank you for all your post. I am Buddhist, and am still grieving for my baby. I am seeking answers. I believe I have found them, but it is in my nature to keep on seeking. Thank you for helping.

My beloved german shepherd baby (only 4 yrs old) just passed away on Wednesday. It was so sudden! There was nothing wrong and then we found her dead in her sleep.

The autopsy found cancer, so at least she didn't have to suffer a cancer-battle, but for me it was such a shock to have her be her normal, active loving self on Tuesday and then for her to be dead in her sleep the next morning.

I also am Buddhist but have c-ptsd with a lot of suicides and animal abuse in my past, so it's just so difficult. Looking to the Dharma for help and your post and especially the video helped. I think maybe I may try to do something like that. Thank you for sharing this.

I'm glad you found the post, Adria - I just lost 2 dogs in the last couple weeks - that I've had for 12 years - and I am finding it very difficult to cope with. The night before I let them go I gave them both refuge - early on in this blog I did a post about giving refuge for dogs - and it made me feel better about letting them go.

One of my meditation instructors once told me that it was really auspicious for a dog to be in a Buddhist home - it just about guaranteed them a human rebirth because they were exposed to the dharma on a daily (hopefully) basis.

I can only hope that there is such a thing as reincarnation and out dogs are being reborn as humans so they can come back and do good stuff and have great lives. That would give - me at least, some comfort about their dying.

I started this blog because my dogs are as important to me - as any other members of my family - and I think they deserve to be part of every part of my life - and that includes my Buddhist life.

I'm glad you guys have gotten some use out of it - that there are other people out there who are like me.

Hi Joan - I know my comment is on a post nearly two years old, but I just wanted to write to let you know how much I appreciate your blog. I just discovered it this evening. I am preparing for my beloved 11-year-old cat Sarasvati to be euthanized tomorrow and was looking online for some buddhist perspectives on pets. I am a member of the Shambhala Center of Washington, DC so I was delighted to find your writings here. Your various posts are very comforting - thank you for sharing! -Lisa

Links to my other blogs and websites